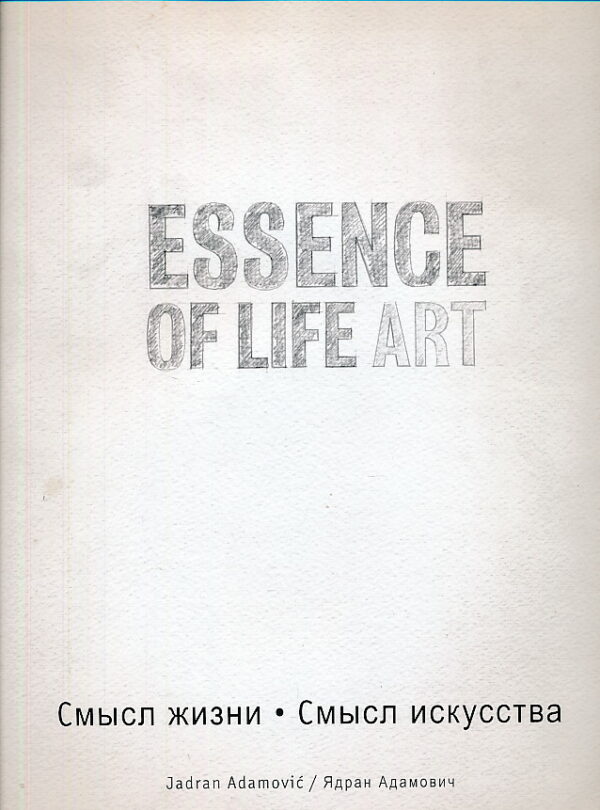 Tekst na engleskom i ruskom jeziku. Suvremena umjetnost istočne Europe 20. stoljeća. Essence of Life Essence of Art, a travelling exhibition with the Tretyakov Gallery, Moscow, and the State Russian Museum, St. Petersburg as its next destinations presents 250 paper-based artworks by renowned Central/Eastern European artists, all active participants in the contemporary art movements during the decades prior to and the years following the turn of the millennium. Their works are reflective of the changes within the social, political and artistic processes, with their artistic roots in Constructivism, the Avant-garde, Socialist Realism and Conceptual Art. The curator of the show, Jadran Adamovic, a Sarajevan artist residing in New York has selected artists and artworks that have apparent affinities with not only the questions posed but also the answers given, articulated in a similar manner no matter whether they live in Moscow, Prague, Zagreb, Ljubljana, Belgrade or overseas. Thus, among those recruited in the selected group of thirty fellow artists and friends are e.g., Vadim Zakharov, who, alongside his visual art activities, is known for his exciting projects, such as his Conceptual work of 1995, in which he set free a collection of selected South American butterflies in the Der Park exhibition space; Alexander Kosolapov, who created the poster entitled, The Emblems of the Century in 1982, with a montage of Lenins profile and the Coca-Cola logo, resulting in Coca-Cola unleashing the controlling authorities on the artist; Róza El-Hassan, who has become known for her Overpopulation project; and Braco Dimitrijevic, whose gigantic posters portraying casual passers-by have appeared in almost every metropolis of the world. Essence of Life Essence of Art can be taken as a sequel to Jadrans previous project, entitled Fra Yu Cult (Fraction of Yugoslavian Culture), realised in 1990 at the Siroki Brijeg Franciscan Monastery in Herzegovina which presented the most progressive and original artists of the time within the Adriatic region. Ludwig Múzeum Museum of Contemporary Art