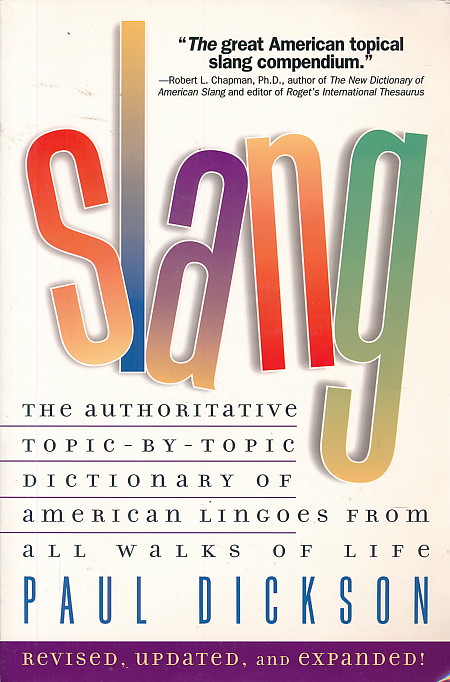 Slang: The Authoritative Topic-by-Topic Dictionary of American Lingoes from All Walks of Life Paperback – 22 February 1999 by Paul Dickson (Author) The first edition of Paul Dickson’s Slang was selected by William Safire of The New York Times as one of the best language books of the year. Completely updated with more than twice as many entries, this latest volume truly encompasses the whole colorful range of current American slang. Divided into twenty-nine broad categories, these are the words that make American English as expressive as it is fascinating. From high schools to the halls of Congress, this invaluable resource reveals the way Americans speak and think today. Burgeoning from the web of new words on the Internet, the fluid language of the drug culture, or the brutal and ironic parlance of the Vietnam and Gulf wars, these verbal inventions have carved their places in the vernacular. Consider such recent coinages as digerati (digital equivalent of literati), spam (to deploy mass postings on the Internet), and phat (good, cool). Drawing from fields as diverse as aviation, the media, and real estate, Dickson has unearthed thousands of pithy expressions for the common denominators of American life, including: wrong side of the curtain (tourist or economy class on an airline), roboanchor (a TV anchor who reads but does not understand the news) and house on steroids (a small home that’s bigger after major remodeling work). With each section prefaced by illuminating discussions of that particular culture’s language, Slang goes well beyond the role of a traditional dictionary; it lays claim to a treasured place in any language-lover’s library.